About Pittsburgh and Benefits Consortium - menu 2

Dr. Manzi graduated magna cum laude from the University of Notre Dame and received her MD from the University of Pittsburgh School of Medicine.  She completed her medical Internship and Residency at Duke University Medical Center where she was appointed Assistant Chief Resident, after which she completed her Fellowship in Rheumatology at UPMC, and received her Masters of Public Health (MPH) from the University of Pittsburgh Graduate School Of Public Health. Dr. Manzi is currently Professor of Medicine and Chair of the Medicine Institute at Allegheny Health Network.  She founded the Lupus Center of Excellence as a new model for Integrated Patient Care and Clinical-Translational Research for patients with chronic autoimmune diseases, a model that she has published and which has inspired similar efforts in other chronic diseases. Dr. Manzi provides care for patients from around the world who travel to Pittsburgh because of her reputation in diagnosis and management.

Academic Interests:
Dr. Manzi’s expertise in research focused on the causes and mechanisms of a broad range of autoimmune diseases. She is recognized nationally and internationally as a pioneer in discovery of new blood tests for diagnosis and management of patients with autoimmune diseases and in scientific investigation of premature cardiovascular disease and other vascular complications of these disorders.  Dr. Manzi has published over 200 original scientific reports and book chapters and she has directed a multi-million dollar research program that has been supported by numerous agencies and foundations including the National Institutes of Health (NIH), Department of Defense, Pennsylvania Department of Health, and the Pittsburgh Foundation.

Dr. Reilly is a board-certified nephrologist and internist.  He grew up in the South Hills of Pittsburgh and graduated from the University of Pittsburgh School of Medicine, where he was inducted into the Alpha Omega Alpha and Gold Humanism Honor Societies, and won several class awards for excellence and service.  He completed his residency and fellowship training at Penn Medicine, and earned a Master’s in Health Policy Research from the Perelman School of Medicine during his time as a fellow in Penn’s Center for Healthcare Improvement and Patient Safety (CHIPS).  After several years as an Associate Program Director for the Penn Internal Medicine Residency and site director at Penn Presbyterian Medical Center, where he won multiple awards for excellence in teaching, he returned home to AHN in 2013.  Dr. Reilly served as Program Director for the Internal Medicine Residency until 2018, when he assumed the role of Vice President and Designated Institutional Official for Allegheny Health Network.  He oversees medical education of residents and students across the network in this role, and remains a core faculty member for the IMRP, attending several weeks a year on the inpatient medicine service and delivering didactic content to the residents.  He lives in the South Hills with his wife Beth and three young children, who make him laugh all day long.  He is die-hard fan of the Pittsburgh Steelers, Penguins, and especially the Pirates (though unlike his kids, the Bucs usually make him cry).

Dr. Reilly’s academic interests span several areas of medical education and health policy.  He has conducted research in patient safety within both medical education and nephrology, and published several peer-reviewed manuscripts on his work, particularly surrounding diagnostic errors and the cognitive biases that underpin them.  Additionally, both at Penn and AHN he has driven re-engineering of the rounding experience to improve communication between the health care team and patients, improving transitions of care and enhancing bedside teaching.  His expertise has been acknowledged through invitations to present educational workshops at several national meetings, and more recently he has given several presentations on the impact of trainee burnout on patient care and educational outcomes.  He is a member of the Educational Committee in the Society to Improve Diagnosis in Medicine and was Chair of their Maintenance of Certification task force.  Dr. Reilly is also a member of the Association of Program Directors of Internal Medicine and the American Society of Nephrology, and is a fellow in the American College of Physicians.  He is a reviewer for the Journal of Graduate Medical Education and Academic Medicine, the Journal of the Association of American Medical Colleges.

Dr. Cuevas is a board certified Internist and primary care physician. She received her medical degree at the University 0f Pittsburgh School of Medicine and then completed her residency at the Massachusetts General Hospital. After finishing her training, she stayed in Boston, working as a General Internist and splitting her time between the MGH Internal Medicine Associates as well as the Boston Health Care for the Homeless Program. Dr. Cuevas moved to Pittsburgh in 2011 and joined the faculty at the Allegheny Health Network. She is one of the founding members of the Center for Inclusion Health in 2014, which was established to improve the systems of care at AHN for marginalized populations. Dr. Cuevas served as an Associate Program Director in the Internal Medicine Residency Program for seven years. She remains as a core faculty member in the residency program while also serving as Director of the Inclusion Health Track and Director of Primary Care Transformation for the Residency Clinics. In addition, Dr. Cuevas also serves as the Academic Officer for the Primary Care Institute. Dr. Cuevas sees outpatients at the AGH Internal Medicine Clinic, and serves as a teaching attending at Allegheny General Hospital.

Academic Interests:
Dr. Cuevas’ academic interests include primary care transformation, inclusion health, behavioral health integration and medication assisted therapy in primary care, and addressing concerns surrounding the social determinants of health. Additionally, she has a strong interest in teaching and mentoring residents and students in these areas of interest. 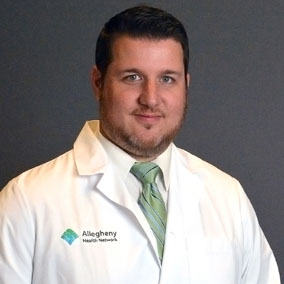 Dr. Kapetanos is a board certified internist and primary care physician. A native of Toronto, Canada, he moved to Pittsburgh to pursue his residency training, and served as a Chief Resident at Allegheny Health Network, where his main focus was the development of a Quality Improvement and Patient Safety (QIPS) infrastructure. Prior to being appointed Program Director, Dr. Kapetanos served as a core faculty member and Quality Officer for five years and as an Associate Program Director thereafter. Dr. Kapetanos has won several awards for his work with residents and medical students, including the Excellence in Ambulatory Teaching Award, Research Mentoring Award, and the Dean's Special Award for Excellence in Clinical Teaching from the Drexel School of Medicine. Dr. Kapetanos sees outpatients at the AGH Internal Medicine Clinic, and serves as a teaching attending at Allegheny General Hospital.

Academic Interests:
Dr. Kapetanos’s academic interests include the transitions of care for hospitalized patients, and the use of electronic health records to improve patient care. Above all, he enjoys mentoring residents through the entire process of conceiving and implementing their own QI projects, and seeing them progress into real-world innovations in medical practice. 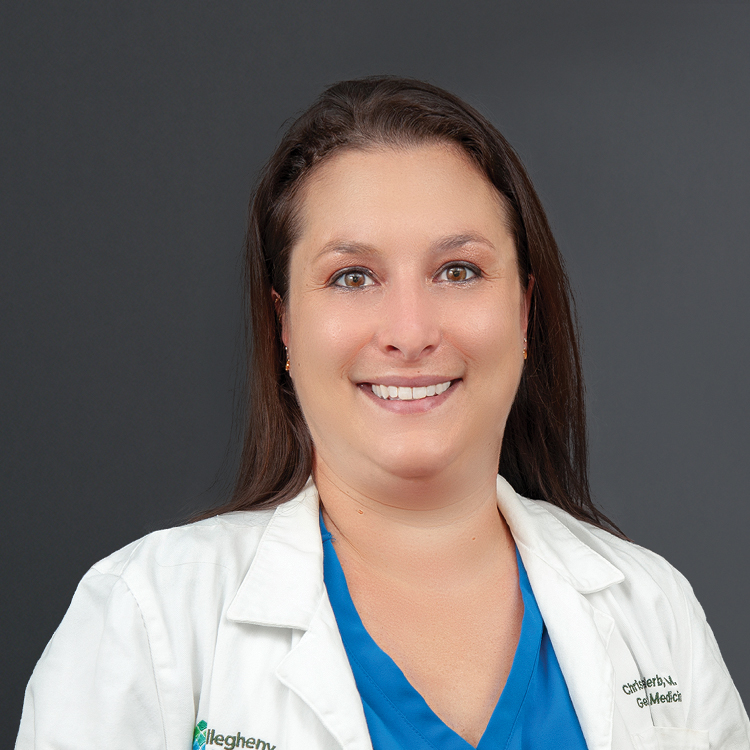 Dr. Herb is a board certified internist and geriatrician. She is a native of Pittsburgh and completed her residency training at Allegheny Health Network where she also served as a chief resident. She completed her fellowship training in geriatric medicine at the UPMC Presbyterian program. Prior to being appointed as an Associate Program Director, she served as core faculty and the subspeciality education coordinator for geriatrics. In this role, she designed the curriculum for the geriatric rotation that every third-year resident completes. Dr. Herb sees inpatient geriatric consults at Allegheny General and serves as a teaching attending at West Penn Hospital. She also sees both long term and rehab patients at the Willows skilled nursing facility in Oakmont.

Academic Interests
Dr. Herb’s academic interests include improving the care of the older adult while hospitalized and in transition to their next level of care. She enjoys increasing awareness and knowledge of geriatric syndromes amongst the medical residents and sharing geriatric pearls at all levels of training. 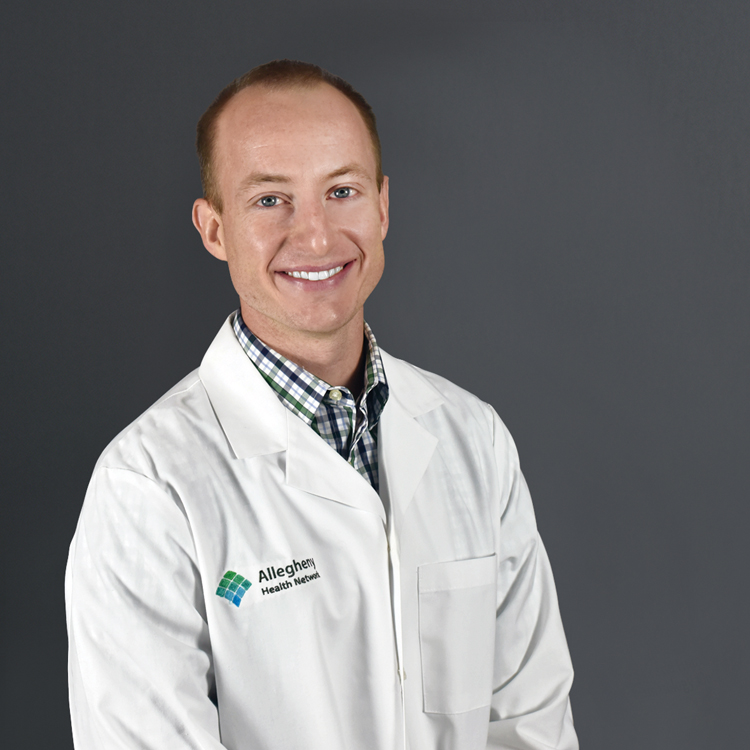 Dr. Robertson is a board eligible internist. A native of Chambersburg Pennsylvanian, Dr. Robertson pursued an undergraduate degree in Anthropology at the University of Notre Dame. After doing a year-long service program in Costa Rica, Dr. Robertson attended medical school at the University of Maryland School of Medicine and subsequently completed residency at UPMC, where he focused on care for underserved populations and ultrasound education. Dr. Robertson joined AHN as a core faculty member and Associate Program Director for the internal medicine residency program. He is a member of the Alpha Omega Alpha and Gold Humanism Honor Societies. Dr. Robertson sees outpatients at the AGH Internal Medicine Clinic and the Center for Inclusion Health, and is a teaching attending and Center for Inclusion Health consultant at Allegheny General and West Penn Hospitals.

Academic Interests
Dr. Robertson’s academic interests include expanding access to care for underserved populations and implementing strategies to improve care for these patients. Additionally, he focuses on point-of-care ultrasound education and its potential impacts on patient care, as well as frequent contributions to medical education podcasts. Dr. Robertson is passionate about the “whole person” approach to mentoring students and residents and fostering in them a commitment to use their skills to help those in need. 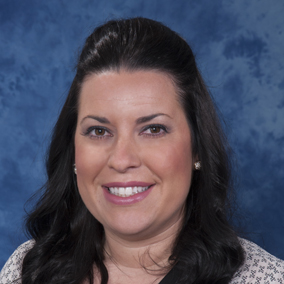 Dr. Sacca is a board certified internal medicine and primary care physician. She is originally from the Pittsburgh area and decided to stay here to do her residency training at Allegheny Health Network. Following her three-year internal medicine residency, she served as Chief Resident, a junior faculty position, and focused her work on building the Primary Care Track and the ambulatory curriculum. After her Chief Residency, Dr. Sacca took a position as core faculty here for the residency program. She also serves as the Medical Director for the West Penn ambulatory residency clinic as well as Director of the Primary Care Track. For the past three years, Dr. Sacca has focused on building interest in the primary care profession in residents and has worked to institute innovative curriculum for the program such as the Flipped Classroom style teaching. She currently serves as Associate Program Director for the AHN internal medicine residency program with a dedication to ambulatory curriculum and resident recruitment for this upcoming academic year. Dr. Sacca won the Professionalism Award (2014) during her training at AHN as well as for Excellence in Ambulatory Teaching (2016). Currently, Dr. Sacca sees patients in the outpatient setting at West Penn Medical Associates, and serves as a teaching attending on the inpatient service at West Penn Hospital.

Academic Interests
Dr. Sacca’s interests in clinical medicine include focusing on preventative health care and women’s and adolescent’s health. Her academic interests include curriculum development, resident recruitment, and high value care. She most enjoys finding ways to engage medical students and residents in ambulatory medicine and mentoring them as they prepare for careers in primary care or other subspecialties. 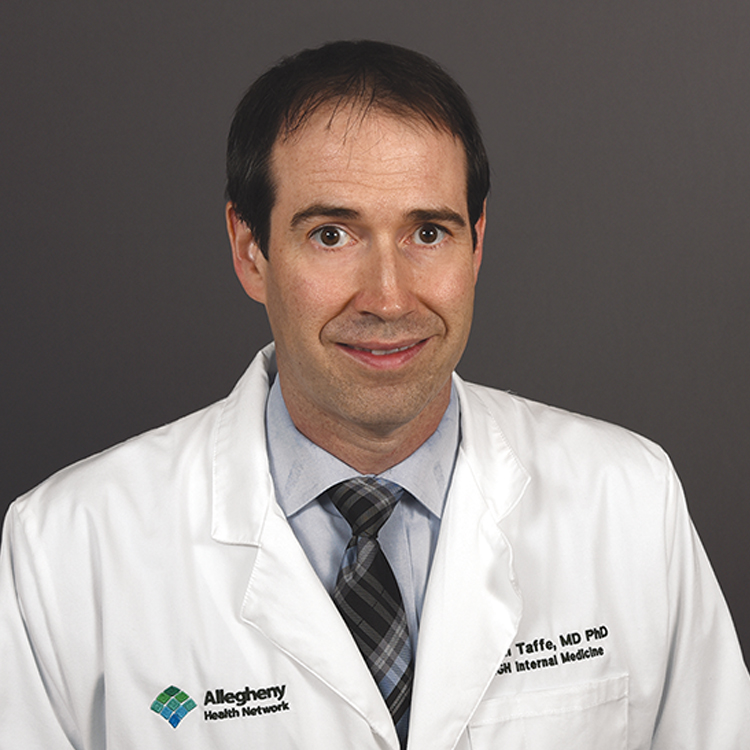 Dr. Taffe is a board certified internist and primary care physician. Born in Chicago, Illinois, but raised in Pittsburgh since the age of seven, he received his MD/PhD at the University of Pittsburgh Medical School and completed his residency training at UPMC Montefiore. Dr. Taffe joined the faculty at the Allegheny Health Network in 2004 and was appointed as an Associate Program Director in 2006. Dr. Taffe has won the Claude R. Joyner Excellence in Teaching award, as selected by the residents, a total of six times since 2010. Dr. Taffe sees outpatients at the AGH Internal Medicine Clinic, where he is the Medical Director and Director of Ambulatory Education. He also serves as a teaching attending at Allegheny General Hospital.

Academic Interests
Dr. Taffe’s academic interests include teaching of the physical exam and evidence based medicine. He runs the residency’s physical exam OSCE in addition to a monthly noon conference series on the exam. He is the director and moderator for the resident “Journal Court,” an innovative approach to journal club in which a study from the medical literature is put on “trial” and debated by two teams of residents.