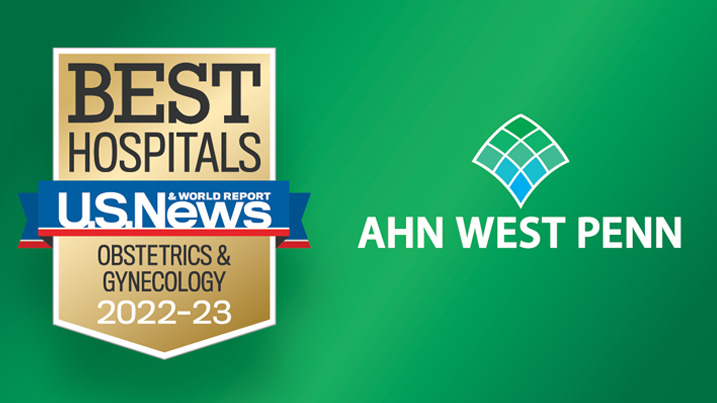 AHN West Penn Hospital Recognized as one of the Nation’s Top 50 Best Hospitals for Obstetrics and Gynecology by U.S. News and World Report

PITTSBURGH, PA  – AHN West Penn Hospital, Allegheny Health Network’s flagship hospital for women’s health care, has been named one of the top 50 hospitals in the nation for obstetrics and gynecology, according to the U.S. News and World Report Best Hospitals Rankings, released to the public today.

West Penn was ranked 31st in the nation for obstetrics and gynecology, making it the highest positioned hospital in the greater western Pennsylvania region for those specialties.

To identify the best hospitals in the country for obstetrics and gynecology, U.S. News evaluates facilities that provide high volume of complex care for patients with pelvic, cervical, uterine and ovarian cancers, diseases and procedures. U.S. News considers factors such as 30-day survival for complex conditions, the number of patients served, and advanced technologies and services available.  Also factored are the views of patients about the quality of their experience at hospitals as well as the reputation of hospitals among board certified physicians.

West Penn was also named by U.S. News as a High Performer in Cancer, meaning it ranks among the top 10 percent of hospitals in the nation in that specialty. West Penn is home to AHN Cancer Institute’s Cell Transplantation/Hematological Oncology, Melanoma, Esophageal Cancer and Gynecologic Oncology practices, and offers advanced surgical, medical and radiation treatments for a wide range of cancers.

“Whether we are guiding a woman through a hysterectomy for a benign condition, or treating a woman with advanced ovarian cancer with some of the most innovative clinical trials available anywhere in the nation, our clinicians at West Penn Hospital provide compassionate, expert, patient-centered care. They work as a multi-disciplinary team, and with patients, to find the best pathways and treatment options for a diverse range of health issues,” said Marcia Klein-Patel, MD, Chair, AHN Women’s Institute.

“I am so proud of the entire team at West Penn and at the AHN Women’s Institute. They are passionate about providing women with the most advanced, specialized care at all stages of their lives,” Dr. Klein-Patel said. “I would particularly like to recognize Thomas Krivak, MD, and his team, for the work they have done in building a comprehensive center for the treatment of gynecological cancers that is second to none.”

“Congratulations to all the professionals at West Penn who helped make this exciting recognition from U.S. News possible,” said Brian Johnson, MD, President, West Penn Hospital. “It reflects the legacy of excellence in clinical care that our team brings to their jobs every day, and we hope it reinforces with our patients and the general public that this hospital is an exceptional source of high-quality, innovative and compassionate health care.”