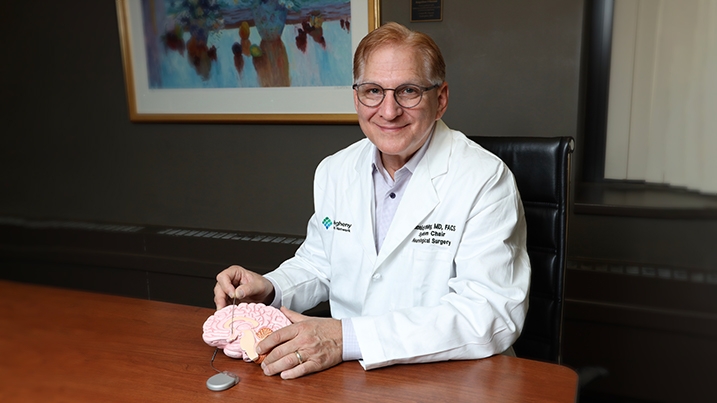 A team of physicians at Allegheny Health Network (AHN) has received FDA approval to begin the second phase of a groundbreaking clinical trial exploring   the efficacy of deep brain stimulation (DBS) in the management of morbid obesity. Leading the study is Donald Whiting, MD, chair of AHN’s Neurosciences Institute, Chief Medical Officer for AHN, and a pioneer in the use of DBS to treat a variety of debilitating neurological conditions.

DBS involves the use of electrodes and a neurostimulator device to deliver mild electrical stimulation that modulates the lateral hypothalamus (LHA) of the brain.  This small area of the brain regulates the balance between food intake and energy output, metabolism, lipid homeostasis and sugar levels, all of which work together to determine a person’s ‘weight setpoint.’

Obesity is a chronic condition that afflicts millions of people, involving an imbalance of food intake and energy expenditure.  Obese individuals receive higher reward signals in the brain from palatable, densely caloric foods, triggering a response not unlike drug addiction.

“This exaggerated cycle of hunger, satiation and reward opens the door to overeating patterns that manifest as a food addiction or food abuse that leads to obesity,” said Dr. Whiting. “By targeting the lateral hypothalamus with DBS, we’re modulating physiological and behavioral aspects of food consumption, with the goal of changing weight setpoints and better regulating energy balance.”

Under Dr. Whiting’s direction, three patients participated in a 2013 feasibility trial of DBS for obesity, and although not all of them succeeded in moving the needle on the scale, each experienced a decreased urge to eat, and most importantly, none experienced negative side effects from the treatment.

“We have known from our use of DBS for almost two decades to treat movement disorders such as Parkinson’s and essential tremor that the procedure is a safe and generally well-tolerated therapy,” said Dr. Whiting. “Although our initial obesity study was a small sample, we were encouraged by the results overall, and particularly for one of the participants who experienced and has maintained considerable weight loss.”

That participant, Pamela Beach of Morgantown, West Virginia has endured a lifelong struggle with her weight, starting when she was a baby. Born two months premature at a tiny three pounds, four ounces, the well-meaning extended family members with whom her parents shared a big farmhouse made sure she never went hungry. At six months old, she weighed 22 pounds, and from that point on, she was overweight.

“I was a chubby baby who grew into a chubby teenager,” she said. “As an adult I fell into the trap of trying every diet and program I could find, losing weight and gaining it all back and then some.” Bariatric surgery was unsuccessful for Beach—she regained all but about 40 pounds after the procedure. At her highest point, she was over 400 pounds, and along with the harmful effect it was having on her body, obesity was taking a toll on her emotionally, as well. “I never felt like I was good enough,” she said.

About the time she’d given up hope of ever achieving a healthy weight, Beach came across an item in the West Virginia University Hospital newsletter, where she was employed, that seemed to speak to her personally. Neurosurgeons from WVU and AHN were seeking obese individuals who met a strict set of criteria to participate in the clinical trial of deep brain stimulation for weight management. She applied and was selected to participate in the trial and began to prepare herself mentally for the procedure. “Naturally, I was scared, it’s brain surgery, after all,” she said. But she placed her trust in the team of surgeons who would be performing the procedure while she was sedated, yet awake and aware, as well as the nurse who would be holding her hand the entire time.

Following her surgery, Beach’s weight loss was sluggish, and somewhat disappointing, until she visited a metabolic clinic in Baton Rouge for fine tuning of the settings on her neurostimulator. “Afterward, it was like a switch had been flipped on,” she said. Her appetite diminished and she thought about food far less often. “The weight came off naturally, without having to think about it,” she said. Today, she weighs half as much as before her DBS procedure and she feels much better overall. Above all, she’s grateful for the opportunity to help advance DBS as a potential treatment for others who have faced the same struggle she has. “I believe that I survived my premature birth 62 years ago for a reason, and perhaps this was my reason,” she said.

While the goals of the current trial will be an extension of the first—namely, studying the procedure for safety and measuring its efficacy in increasing an individual’s metabolic rate—several modifications will be integrated into the process. For one, a new generation of DBS technology will be used that features major advancements over its predecessor. Additionally, lessons learned from the preliminary work include insight into the level of DBS energy output required to affect weight loss, so the DBS setting will be programmed to a higher level to achieve the optimal metabolic rate necessary to boost energy expenditure. As in the first trial, Dr. Whiting will be joined by fellow AHN neurosurgeon and DBS specialist Nestor Tomycz, MD.

The AHN study will enroll six male and female patients from 22 to 65 years old, who have a body mass index (BMI) of higher than 50, and who are at significant risk of morbidity and mortality due to obesity. They will also have undergone gastrointestinal bypass surgery without achieving sustainable results.

George Eid, MD, chair of the AHN Bariatric and Metabolic Institute and co-investigator for the trial suggests that the failure of gastric bypass to manage obesity may be a direct result of lack of attention to the underlying neurophysiologic basis of the disease.

“Feeding behavior involves a delicate interplay between a body’s need for food and the reward system that can powerfully motivate excessive eating in some individuals,” said Dr. Eid. “In some individuals, neural networks will fire after eating at a level comparable to that of a heroin addict.”

Obesity is one of the country’s most pressing public health concerns as it has been increasing by epidemic proportions. In 2020, the adult obesity rate in this country registered 42.4 percent, representing the first time the national rate has passed the 40 percent mark. Most alarming is the rate at which it is increasing—it has grown 26 percent since 2008.

The direct costs associated with obesity in U.S. represent up to 20 percent of the national health expenditure and the direct and indirect costs attributable to obesity are $209 and $66 billion, respectively, exceeding the economic impact related to cigarette smoking.

For those who have struggled with weight management throughout their lives, and face life-threatening issues associated with obesity, the more options we can provide to help them regain their health the better,” said Dr. Whiting.  “We have a long way to go in establishing DBS as one of those options, but we are very excited to be taking the next important step in assessing it’s potential.”

Dr. Whiting said the AHN study may also serve as a framework for future research on other health issues that involve some of the same neural pathways, such as drug and alcohol addiction.