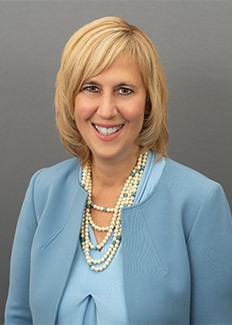 Dr. Peters serves as the Chief Nursing Officer (CNO) of two Allegheny Health Network (AHN) hospitals - Canonsburg and Jefferson. She has practiced nursing in direct care capacities in cardiac progressive and coronary care. Prior to her role as CNO, she served as the Associate Nurse Executive at Jefferson. Other nursing leadership roles include Nursing Director, Nurse Manager, Nursing Faculty, Administrative Supervisor, and Study Coordinator of a Research Project.

She received her diploma in nursing from the Western Pennsylvania Hospital School of Nursing and a Bachelor of Science in Nursing from The Pennsylvania State University. She earned a dual Masters of Nursing and Masters of Business Administration from the University of Pittsburgh. She received her Doctorate of Nursing Practice from Carlow University with a scholarly focus on the implementation of lean as a strategy to improve nurse communication in patient experience scores. She is published in professional journals such as Nursing and Nursing Science Quarterly. She is certified as a Nurse Executive – Advanced through the American Nurses Credentialing Center. Dr. Peters is an adjunct professor at Georgetown University in Washington, DC in the nursing doctorate and the BSN to DNP program.

An accomplished nurse leader, Dr. Peters is passionate about the utilization of operational excellence as a unique platform to identify barriers and solve problems. She has focused on infection prevention in healthcare utilizing the Toyota production System methodology. A sought-after speaker and subject matter expert, Dr. Peters has presented locally and nationally on the application of lean methodology in the elimination of central line-associated blood stream infections, appearing on ABC’s 20/20 in a segment titled “Germs: The Dirty Dozen”. Further, she led the AHN collaborative in the prevention of C.difficile.

Dr. Peters is a sought-after speaker and highly recognized in the nursing profession. She delivered the keynote address at her alma mater, the Western Pennsylvania Hospital School of Nursing graduating classes of 2010 and 2018. She was featured in the Advisory Board Company Nursing Leadership Academy Module, received the Baxter AACN Circle of Excellence Award for Patient Safety, the Cameos of Caring Advanced Administrative Practice Award, and the Fine Award, sponsored by the Fine Foundation and the Jewish Healthcare Foundation. In addition, Dr. Peters received Honorable Mention for the first annual Excellence in Nursing Awards by Pittsburgh Magazine.