Travis is all about being the best dad for his three girls. And he’s never missing a moment with them after having a rare, lifesaving open-heart surgery only offered at a handful of hospitals in the U.S. — including AHN.

In 2018, Travis was working in the oil fields in Bakersfield, CA, when he contracted Valley fever, a fungal spore that’s common in the western United States. Doctors there treated him, but several months later, he felt exhausted by any form of physical activity, and began to feel pressure on the right side of his heart. “It worsened as time went on to the point where I couldn’t even walk up a flight of steps,” he said. “I thought, is this what 42 feels like?”

He continued to see his doctors, and they all chalked up his symptoms to Valley fever.

Later that year, Travis and his family relocated here to Pittsburgh. He saw AHN pulmonary disease doctor Eric Bihler to follow up on his Valley fever. Dr. Bihler, however, suspected there was more to the story and referred Travis to AHN cardiovascular specialists.

He had a series of tests and imaging with AHN cardiologist Dr. Lindsay Mehring and Dr. Hayah Kassis-George, an AHN heart failure and transplant specialist. The results showed that Travis had blood clots in his lungs, a telltale sign of chronic thromboembolic pulmonary hypertension (CTEPH), a rare disease with symptoms similar to asthma, COPD, and cardiovascular disease.

“For over a year, I felt like I wasn’t being heard,” said Travis. “In California, I had constant doctor visits and no one had answers — until I moved to Pittsburgh and found AHN.”

Blood clots in the lungs damage the heart

CTEPH is a rare condition where blood clots in the vessels within the lungs block blood flow, increasing blood pressure in the lungs and making the heart work harder, and straining it and causing it to become enlarged and weak. Over time, CTEPH can lead to heart failure and can even be fatal.

As Travis experienced, as CTEPH damages the lungs, arteries, and heart, it can make even the most basic everyday activities insurmountable. “It was a gradual buildup,” said Travis. “But everything became a struggle. Even if I laughed too hard, I felt like I was going to pass out.”

Anyone can develop CTEPH, and because it’s so rare, most people with CTEPH never know they have blood clots since the most common symptom — shortness of breath — is also the common symptom of so many other health conditions.

People with CTEPH, like Travis, require an intricate surgical procedure to remove the blood clots. AHN is one of an extremely limited number of medical centers nationwide able to perform the surgery, called pulmonary thromboendarterectomy (PTE). During this procedure, cardiovascular surgeons remove each of the clots from the arteries that bring blood to the lungs. The surgery can cure CTEPH and return the patient to a normal, active lifestyle after recovery.

The thought of open-heart surgery was scary for Travis. “The hardest thing to wrap my mind around was what would happen to my daughters if they were to lose their father. But I was in the best possible hands.”

Travis’ surgical team was led by Dr. Candice Lee, an AHN thoracic and cardiac surgeon, and one of the few surgeons in the U.S. trained to perform PTE. “By surgically removing the blood clots from arterial branches in the lungs, we could reverse his heart failure,” she said.

After recovery, Travis is the dad he wants to be

After two weeks in the hospital and two weeks of recovery at home, Travis was able to get back to living his best life, with no restrictions on physical activity. He’s back to doing high-intensity workouts at the gym. But the biggest test of his recovery? Keeping up with his daughters — 14, 11, and 9 years old.

“The girls really keep me on my toes,” Travis said. “We can play football and soccer. We’ll run and play hide and seek. And they love for me to scare them."

He credits his return to the expertise of his AHN doctors and the focus of everyone who took care of him. “Dr. Lee and the AHN team are my real-life superheroes,” Travis said. “They gave me a second chance at life.”

From preventive care to help keep hearts healthy to complex conditions leading to heart failure like CTEPH, the AHN Cardiovascular Institute is a national and regional leader in cardiac care. The institute is comprised of a highly skilled team of heart specialists with access to latest technology and techniques for treating all types of cardiovascular conditions. We offer comprehensive heart care services throughout our entire network, with the most advanced services centered at our hub at Allegheny General Hospital, the only pulmonary hypertension clinic in western Pennsylvania accredited by the Pulmonary Hypertension Association as a Center for Comprehensive Care. 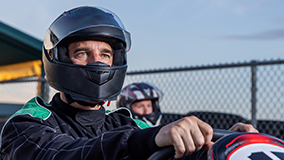